Things are going well between my shower lady and I. We’ve finally figured each other out. She’s still a bit rough when she’s dressing me, but she takes the time to shower me and blow-dry my hair. She heats up my towel on the heater, which I think is on way too much. I actually like showering now, which became even more clear when she went on holiday in May and I was stuck with a substitute.

I got a copy of Hans Warren’s final diary for my birthday. I specifically asked for it because I wanted to know what the writing of a professional diarist looks like. Besides, I wanted to know what was going through his head when he and his boyfriend Mario went through a rough patch in his last year. It was rough. I know writing must have been therapeutic for him, but it doesn’t take long for the reader to spot certain repetitions in the text, like him being lukewarm on the trips Mario took him on, not liking eating out, buying African art and having difficulty sleeping and pooping, but also Mario’s suspicions that Hans Warren was being difficult for the sake of being difficult. I skipped a lot of pages while I was reading it. I immediately bought the book written by Mario Molengraaf as a homage to Hans. I also did something I’d never done before, and had the book thrown in the bin. Obviously, that struck a chord with Hein, who immediately took it out of the trash.

In early May, we had a family holiday in Steenwijk. There were a trampoline and a ping pong table. I’d gladly visit it again. It had a sunroom, a huge living room, a big hearth, a verandah connected to a private lawn, a great handicapped bathroom and a giant kitchen. We loved it from day one. The weather was great too. We only spent the nights inside, the rest of the time we were outside. There were more kids than there were adults, but we did just fine. The trampoline was used by old and young people alike and we had plenty of table tennis competitions over the weekend. Lieke won in the end, beating her own son, Tim. It’s too bad that I felt sick on Saturday, so I spent most of that day inside. On Sunday we went on a boat ride through Giethoorn and hiked in Kalenberg, the exact same thing we did seven years ago. 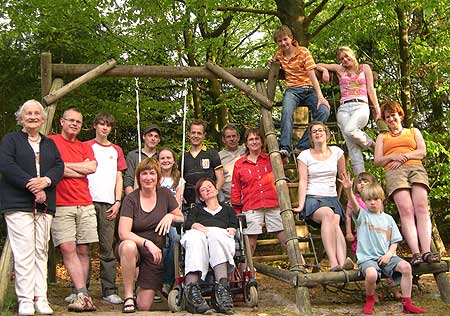 We’re not too concerned about Floor’s final exams. She’s been drinking a lot of cola so she doesn’t fall asleep on top of her books. She gave us a list of rules so we know what we can and can’t say during her exams. At least we’re still allowed to pick what we’re having for dinner. We’ve been corresponding with a lot of people who are in the same situation. Tips on foods that give you a lot of energy, for instance. It turns out that bananas and glucose tablets seem to be the best options, so we’ve bought a lot of those. She’ll get the results on June 15th.
After she finished her last exam, Floor wasn’t as sure of herself as she was at the start. One week of Greece with her friends will surely calm her down.

I got the first season of 24 for christmas. I bought series 2, 3 and 4 online. I downloaded the final series, the fifth one, online. That’s it for 24 for now. 5 x 24 x 45 minutes = 90 hours of watching TV with Ward. I’ll miss it. I downloaded and watched Prison Break and Lost with Floor. There are only three episodes left, then we’ll have to wait for the series to start again. It’s one of the few things we’re able to do together.
Just when I’d decided to download a few more films, I discovered that the Swedish police shut down The Pirate Bay.

Eight years since my diagnosis

I was diagnosed with ALS eight years ago, which means I’ve had it for nine years. It’s become the new normal, even to the people close to me. I’ve had a PEG (stomach tube) for six years now, too, but I still eat regular food. Yeah, I’d say May has been an important month in my life.

Writing emails has become difficult, more so than writing in my diary. Roeline and Lieke have been helping me get through my emails, diligently typing out the letters that are coming out of my nigh-unintelligible mouth. It’s such a great help. I was starting to dread email correspondence for a while.

P.S. I hope I don’t have to remind you about June 21st, World ALS Day.