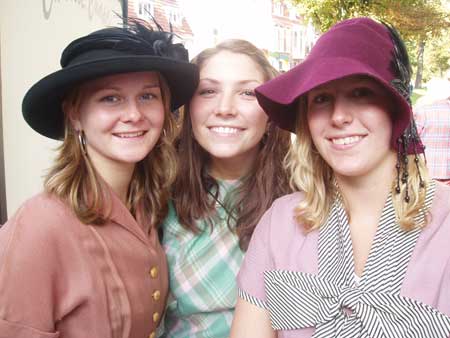 October 3rd (the day Leiden was freed from Spanish rule in 1574) was on a Monday this year, which meant we were treated to a long weekend. For the first time in a few years, I actually felt like celebrating this time. It surprised me too, as I’ve become increasingly apathetic, especially when it comes to big events like this one. Maybe it was the weather, maybe it was because of Floor’s participation. October 3rd is full of age-old traditions; eating hotchpotch with our friends, going to the fair with Gisele, going to see the flea market and rounding off the day by watching the parade from the same spot we always do. I wasn’t expecting to have as much fun as I did. Floor is writing a research project on the conception of the celebration of October 3rd, which first arose in the 19th century. What’s a better way to do research than to participate in the event itself? In the morning, during the traditional breakfast of herring in a white bun, she asked people to fill out a questionnaire to test their knowledge of October 3rd (people from Leiden knew their history well) and in the afternoon she participated in the parade.

Our house may be rustic, but it’s very old too. In July our drainpipe overflowed (which we’ve fixed since then), three weeks later it turned out that our upstairs bathroom was leaking water, which lead to some nasty water damage downstairs. We had to shower on the ground floor for two weeks until it was fixed. On to the next leakage. When it’s storming outside, Ward has to sleep somewhere else because of the leak right above his bed. After some makeshift repairs that had little to no effect, we took drastic measures and decided to repair the dormer window and completely replace our roof tiles. We thought enough was enough when Ward had to regularly sleep next to his bed instead of in it. Soon, our house will be bustling with builders again, but sadly they’ll be working without my supervision, on a project I will never see the results of myself. There’s no way to get me up to the attic. I’ll have to wait for pictures and hearsay, I guess.

Sometimes, I’m completely unable to move when I”m in bed, a frightening sensation. Sometimes I’ll wake Hein up and try to move on my own. What makes the whole situation even more difficult is the fact that my breathing speeds up whenever I panic, which can only be remedied by very slow deliberate breathing until I’m calm. Sometimes I’ll have up to four panic attacks in a single night and, with each one, my hopes for a good night sleep diminish. As a last resort, I decide to sleep downstairs, which is not a great feeling. I don’t have trouble breathing during panic attacks, it’s usually a feeling of being chased, combine with panic and constantly and fearfully wondering when I’ll get control of my breathing back. It’s been going on for three weeks. It’s tiring me out and irritating for everyone involved. Last Tuesday I had another blood test. My arterial blood gases are just fine, nothing that would indicate a lack of oxygen. That’s amazing in itself, because since 2001 I’ve had the miniscule lung capacity of 1 litre, 30% of a normal person’s capacity, which is considered critical.

I talk to God sometimes. I don’t bother Him with big questions, mind you. No “God, give me strength in these trying times.” No “God, please give strength to my husband and kids”. I never ask Him “Why me?”, because it’s the same question as “Why not me?” No, I only call on him for very basic favours. “God, please give me one good night’s sleep so I don’t have to wake Hein up.” And “God, please make pooping easier for me (because of my diminished breathing, I have difficulty applying pressure).” Nothing more basal than those two things, right? Nonetheless, it’s pooping and sleeping that are the biggest sources of discomfort and annoyance for me. My illness is more of a given.

My ALS is a given. I can be as optimistic or as pessimistic as I want, but that doesn’t change the fact that I have ALS. The best thing for me to do in this situation is to not dwell on it much and deal with it the best I can. It’s wholly different for Hein. This didn’t happen to him, it happened to me. He had a choice, no matter how infinitesimal and unappealing. I think acceptance is more difficulty in his situation. Hein might feel envious of couples who get to go on holiday to Morocco or hiking in England while I’m always a limiting factor when it comes to holiday destinations. He’s got the same limits I’ve got, except he has to be a functioning member of society while I’m able to live a more sheltered life, safely at home. Sometimes he feels like life is passing him by. I am powerless to help him. Nothing to do except hope that he’ll feel better soon. I’m being explicit because I feel like this feeling plays a big role in the lives of most ALS patients and their partners. Know that you are not the only one. Is knowing that of help? I don’t think so, to be honest.

Hein is taking a weekend off on Friday. He’s the only person who is able to help me use the actual toilet, which is the only place I’m able to defecate, as the commode is too high up. So it was essential for me to have pooped before Hein left, but I couldn’t. It’s awful, trying to defecate on command. I had some mild success on the commode during the weekend, but when Hein I immediately had to go. “Did you poop?” has become a popular phrase in our household. This can’t go on any longer. It’s so stressful.

On the evening of Saturday, October 29th, I went to see the movie Pride and Prejudice with Lieke. The film was fine, but I enjoyed the walk there more. The weather was mild, like a summer night. We got out of the theatre at 12, at which time the only people who were still outside were youths, walking around in large groups, not wearing jackets. We also had time to admire the Holocaust memorial designed by Jan Wolkers.

I should be rewriting instructions for my new carer, but I can’t get myself to start, however useful it would be. I’ve lost myself in Lost, a TV show about a group of people who find themselves on a desert island after their plane crashed. It’s a thrilling series, which I’ve completely downloaded off the internet. Floor is as addicted as I am. We watched episode upon episode on my PC. I haven’t been doing anything else. And, once we’re done with Lost, I’ve got a novel to finish, penned by one of my bridge buddies.