One would think that my dreams would have caught on to the fact that I have ALS. The truth is the complete opposite. In my dreams, I ski, hike up and down mountains, go to work (knowing I’m ill, but apparently I’ve recovered in those dreams) and generally act like a normal person. In some dreams I’m unable to talk, although eating is never a problem. Dream-me likes thick chips with mayonnaise. People are strange like that. I often have lucid dreams, where I know I’m dreaming but I don’t wake up. Sometimes, when I’m sleeping in my chair downstairs, I dream of standing on the edge of a ravine. After that, I’ll jolt awake and feverishly check my surroundings to confirm that I’m, indeed, just in a chair in my living room. I’ve heard so many other people with ALS talk about how their dreams adjusted to their condition. I guess I just haven’t caught up yet. 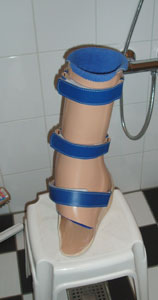 Last summer, I was afraid I wouldn’t be able to stand upright in the patient lift anymore. I’d often sprain my ankle, making me fall to the right. I tried wearing one of Ward’s football ankle guards, but it couldn’t bear the load. Hein made an appointment at the rehabilitation centre to find a solution, a small sturdy ankle device, which I can wear on top of my shoe. I’d forgotten about how big and crude those things look. They have to, otherwise they wouldn’t be able to support my load. What I ended up getting was a splint, not a convenient little device but something that requires a lot of effort to put on. When I’m wearing it, I feel like I have no control left over my leg. It’s in the bathroom at the moment. I’m hoping I won’t need it anytime soon.
My physical therapist works with the mentally handicapped and often complains about his clients throwing away or simply not using their splints and other appliances. I can relate to my fellow clients.

Instruments like this one are never fashionable or easy to use. I write with a woman whose sister has ALS, which often makes her slump forward. Her sister has a little harness to prevent that, but whenever it’s used, she puts up a real fight. She can’t talk at all anymore. Imagine, still having your full mental capabilities, all while having no way to explain your discomfort or take off the harness. Horrible. I get the intention of such tools, but they often defeat their own purpose: making the user feel as normal as possible. Sometimes, the means are worse than the ends.

We’ve never celebrated Sinterklaas as efficiently as we did this year. We celebrated it early, on the 2nd of December, a Saturday. We’d already bought the presents a week prior, most of them on my weekly Saturday walk. I’d started writing the poems a week before, two to four of them a day. I dictated them, because writing proved too tiresome. It wasn’t that bad, whenever I’d come up with a few lines, I’d call someone over the write them down. Once you’ve picked a theme, writing a poem is a piece of cake. I finished the last one on Thursday, so I had plenty of time to help the others write theirs. Christmas preparations were just as efficient. Long before Sinterklaas, I’d already bought Christmas presents for my carers, Christmas wreaths and the book written by Loes. Piece of cake. It only took half an hour to find a suitable Christmas tree, and another two for Hein and Floor to decorate it, before we cleaned everything up. The tree turned out so symmetrical and well-decorated that it almost looks artificial. Moreover, Nordmann firs don’t have that usual pine smell, which only made it seem more like plastic.

I think it’s because I rarely ever go into shops, but I never make spur-of-the-moment purchases. I make shopping lists and keep stock of things we need in my head. They usually contain things like food and toilet paper. But on some Saturdays I go to the supermarket with Netty or Marjolein, and whenever I do, I have them wheel me around the sweets and baked goods isles. I buy as much as I can: pancakes, tiramisu, fish, candles, croissants and other delicacies. I can’t eat any of the food, but Hein and the kids can. Their appreciation is enough for me.

I can’t eat around other people anymore. I get restless, I choke on my food more often and have coughing fits. I tend to give up at that point. That’s why I’m not looking forward to Christmas as much as before. It’s a whole holiday that’s essentially centred around eating. On Christmas Eve, we had dinner with our friends and their kids like we always do. Fortunately, I’d had something to eat beforehand so I didn’t feel pressured to eat more during family dinner. No questions about me eating enough, although I did get spoonfed some mashed potatoes a few times. On Christmas Day, our mothers came over for dinner, which was more of a pain. I choked on a piece of fruit, which took an hour to hawk up. One hour I could have spent with my family, I spent alone, coughing. Only afterwards was I able to enjoy the party. On Boxing Day, we were supposed to have dinner with my in-laws. I proposed to go for a walk instead of dinner, which I enjoyed. I’m glad almost the whole family decided to join us for our stroll.

In her Christmas post, Loes wrote that she’s feeling more and more distant from the people in her life. I feel like that too, although I can easily say that the root of my problem is my inability to talk. Loes still has that ability, so there must be other factors at play in her case. Whether I’m feeling distant is often the deciding factor for my enjoyment of a conversation. I’m happy as long as I have even the smallest sway over the conversation, I’m content. That’s why I despise being in larger crowds. There were six of us at our New Year’s Eve party, six of which were children. That’s a lot of people. Most conversations went over my head, although playing Party & Co was fun. At twelve, we went outside to watch the fireworks. They were a bit of a letdown, so went inside to have drinks. It’s become a staple of New Year’s Eve. I always go in with the highest expectations, but always feel a bit let down by the end of it.